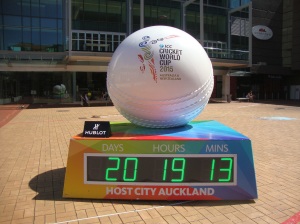 With just a week to go until world cricket’s major limited overs tournament kicks off in Christchurch, I take a look at a vital role in the ODI game – The role of “The Finisher.”

The pressures that come with the World Cup bring together hero’s and villains alike. Batsmen and bowlers who keep their nerve to guide their respective sides to glory or the polar opposite and guys who wilt in the heat of the moment and fail under the expectations.

The term finisher originates from the man many believe was the finest finisher of them all – Australian Michael Bevan. Bevan was part of the 1999 and 2003 Australian World Cup winning sides and scored 6912 runs from 232 ODIs at 53.58. When it came to an ODI chase, the burly left-hander came into his element. In successful run chases his 45 innings brought him 25 not outs and 1725 runs at 86.25 – which also included three hundreds and twelve fifties.

The importance of being a good finisher is keeping calm, often when batting with the tail, with the run rate increasing and regular wickets falling at the other end. Many batsmen panic and fall to the big shot in these situations while others simply keep calm and back their abilities to see the job through using calculated risks whilst also making sure they often rotate the strike and shepherd the tail.

With history showing the role of the finisher to be an important factor between glory and failure I have picked five key finishers to look out for during the upcoming global tournament. 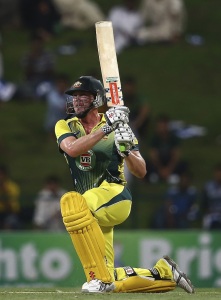 Despite the fact that he’s set to miss the first week of the tournament due to a side strain, the all-round abilities of Faulkner remain a vital part of a strong looking Australian outfit.

Although he is primarily seen as a left arm medium fast bowler, it’s his late order hitting and composure with the bat that has seen him talked up as Australia’s latest finisher – following in the footsteps of the greats in Bevan and Michael Hussey before him.

With the all round depth that Australia currents possesses in their ODI side, the Tasmanian is not usually scheduled to come in until number eight and often doesn’t get a bat. But when he is required to strap the pads on he is often the man for a crisis and a high pressure run chase.

In twelve ODI second innings he averages 109.50 with eight not outs and a strike rate of 131.53 – A record better than any other player going to the World Cup.

The 24-year-old currently averages 48 in ODI’s and first truly showcased his lower order hitting prowess in a 2013 ODI series in India – where he scored an impressive 230 runs across just four innings at an average of 115 including a career best 116 and a stunning unbeaten 64 off 29 balls to lead his side home in Mohali.

Coming in at number nine with his side staring down the barrel at 7-206 chasing a further 95 to win with 15.1 overs remaining, Faulkner pulled off a remarkable heist and led his side home with three balls to spare.

After seeing two wickets fall at the other end he was joined by number 11 Clint McKay with 57 runs still required but kept his cool and launched three 4’s and five 6’s in a 47-ball 69. His partnership with McKay was the second largest ten-wicket stand to win a match and Faulkner duly knocked off the final 25 runs needed in just seven deliveries.

The wicketkeeper-batsman returned to the country of his birth in 2012 after initially representing Australia in four ODI’s back in 2008 and by 2013 he was a fixture in the Blackcaps limited overs sides.

By picking him in their ODI side the Kiwi’s have allowed skipper Brendon McCullum the freedom to focus on the captaincy and his aggressive batting without worrying about keeping wicket.

But Ronchi isn’t just here to keep the balance of the side intact. Coming in at number seven he has started to put his own mark on the side and compliment their strong middle order with his late hitting and finishing skills.

In a recent ODI against Sri Lanka at Dunedin he blasted the highest ever ODI score by a number seven when hitting a brutal 170 not out off just 99 deliveries. His century came of just 74 balls as he, alongside Grant Elliott put on a world record unbeaten 267 for the sixth wicket, having come to the crease at 4-82 they left the visitors with a chase of 361.

Despite his record breaking hundred getting all the plaudits he also helped the Blackcaps chase down Sri Lanka’s 276 in Nelson with an unbeaten 32 from just 15 deliveries. With centurion Kane Williamson having just been dismissed, Ronchi walked to the crease with 47 runs still needed from the remaining 36 deliveries, when Corey Anderson was then run out, Ronchi had seen enough and quickly made light of the chase by taking 24 runs off one Thisara Perera over to all but finish the game off.

Two other performances of note came in a pair of matches against South Africa in Mount Maunganui last year where he made 99 and 79 in losing causes. 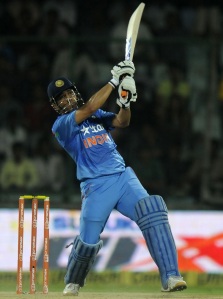 What more needs to be said about Mr Calm.

A veteran of 254 ODIs and 90 Test matches, India’s most successful leader is approaching his third World Cup after an appearance in 2007 and a winners medal in 2011. The man known as ‘Mahi’ is undoubtably ranked up their with the finest limited overs players of all time.

Time and time again the cultured right-hander has snatched his side victory from the jaws of defeat with powerful and calculated hitting toward the end of the innings and he is regarded alongside Bevan as the greatest finisher in the history of one day cricket.

Only Sachin Tendulkar can claim to be adored by the billions of India public more than Dhoni – Especially after the latter led his side to their first World Cup title since 1983 four years ago with a breathtaking finishing act to the scale of 91 unbeaten runs on home soil.

An ODI average of 52.29 is almost unrivalled in the modern day, but for a player who plays the risky and entertaining brand of cricket that Dhoni does – it strikes of greatness.

After giving up Test cricket recently, the 33-year-old has decided to stake more of his time in ODI and T20I cricket alongside his commitments for IPL side Chennai Super Kings and India will hope there are a few more years left yet in his hugely successful limited overs career.

The world’s premier finisher of course had to show off his skills under pressure on the world’s biggest stage, the World Cup final.

Leading into the final, Dhoni had had a quiet time of things during the World Cup with teammate and national icon Tendulkar taking centre stage, but his captain wasn’t to be out done – cometh of the hour cometh the man.

Chasing 275 to win, India lost openers Tendulkar and Virender Sehwag inside the first seven overs and when Virat Kohli also fell with more than half the target still required, Dhoni decided to promote himself ahead of the in-form Yuvraj Singh.

Alongside Gautam Gambhir he took the Sri Lanka’s on for a tournament winning undefeated 91 from 79 balls adding a 109-run partnership in the process and eventually sealing the victory with a huge six into the grandstands to send over a billion Indians into party mood. Well played sir, well played. 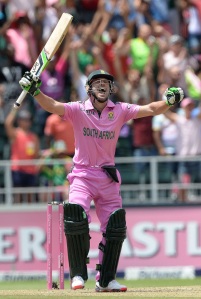 The man of the moment! de Villiers recently stopped the world in its tracks after blasting the world’s fastest ever ODI hundred against the hapless West Indians in Johannesburg.

Although he only came to the crease just eight deliveries before the 40th over, the brilliant right-hander somehow managed a brutal 31-ball hundred and still didn’t bat out the innings after falling for 149 in the 50th over chasing yet another six. He hit sixteen in total to go alongside his nine fours.

Despite this magnificent achievement, it perhaps didn’t shock that many people. That’s AB de Villiers for you, there’s not many things that he can’t do on a cricket field!

Although it seems he has been around forever (he made his ODI debut almost exactly a decade ago) he will only turn 31 during the tournament and could have at least another 5-10 years of cricket left in him.

If South Africa are to win their first World Cup and finally rid themselves of the chokers tag that has followed them for years, then they need their captain and talisman to perform the Lance Klusener like finishing skills of the late 90’s.

Test and ODI averages of over 52 confirm de Villiers as the best batsman in the world at present and with 19 ODI hundreds at a strike rate of 97.16 few would bet against him leading his side to next months World Cup final in Melbourne.

Faced with a steep target of 328 against a good Australian bowling attack, the Proteas made light work of the chase thanks to hundreds and a 206-run partnership from de Villiers and Faf du Plessis. They eventually chased the total down with 20 deliveries spare.

De Villiers’ unbeaten 136 was made off just 106 balls and was at the time the second highest score by a South African captain in one day cricket.

The innings was typically clinical de Villiers – including both power and finesse on equal measures and helped with eleven fours and two sixes at a high strike rate of 128.30.

If there’s one man who knows how to pace an ODI innings, it’s the Proteas captain.

Since then he has also been involved in contract disputes and was originally left out of the squad for the recently concluded 4-1 ODI series defeat in South Africa before been reinstated.

Once a captain across all formats for the Windies, Sammy is now just leader of the T20I side and has come back into the ranks as an ODI player with the side now skippered by youngster Jason Holder.

But despite of this he still remains an important part of the side in the forthcoming World Cup not least due to the absence of fellow hard hitting all rounders Dwayne Bravo and Kieron Pollard.

Despite his lack of an ODI hundred, Sammy has a high strike rate of over 100 and previous history of finishing off run chases – A skill he has transferred over from his past experiences in T20 cricket. His remarkable finish’s in T20I’s in the past year include: 30* off 9 (v England), 34* off 13 (v Australia) and 20* off 7 (v South Africa).

Up against a powerful Indian side on home soil and facing a stiff chase of 289, the West Indians got home with three balls and two wickets to spare, mainly thanks to Sammy’s unbeaten 45-ball 63.

The chase was set up by fifties to Kieren Powell, Darren Bravo and Lendl Simmons, but wickets kept falling and the asking rate climbing. Walking in at 5-185 with over a hundred still required, Sammy took it upon himself to seek boundaries with four 4’s and as many sixes been blasted from the bat of the tall right-hander.

His innings was reached at a strike rate of 140.00 despite him playing out a maiden when he first came to the crease.

With the current disarray in West Indies cricket, they will need a few more Sammy specials to brighten the spirits of their long suffering fans.